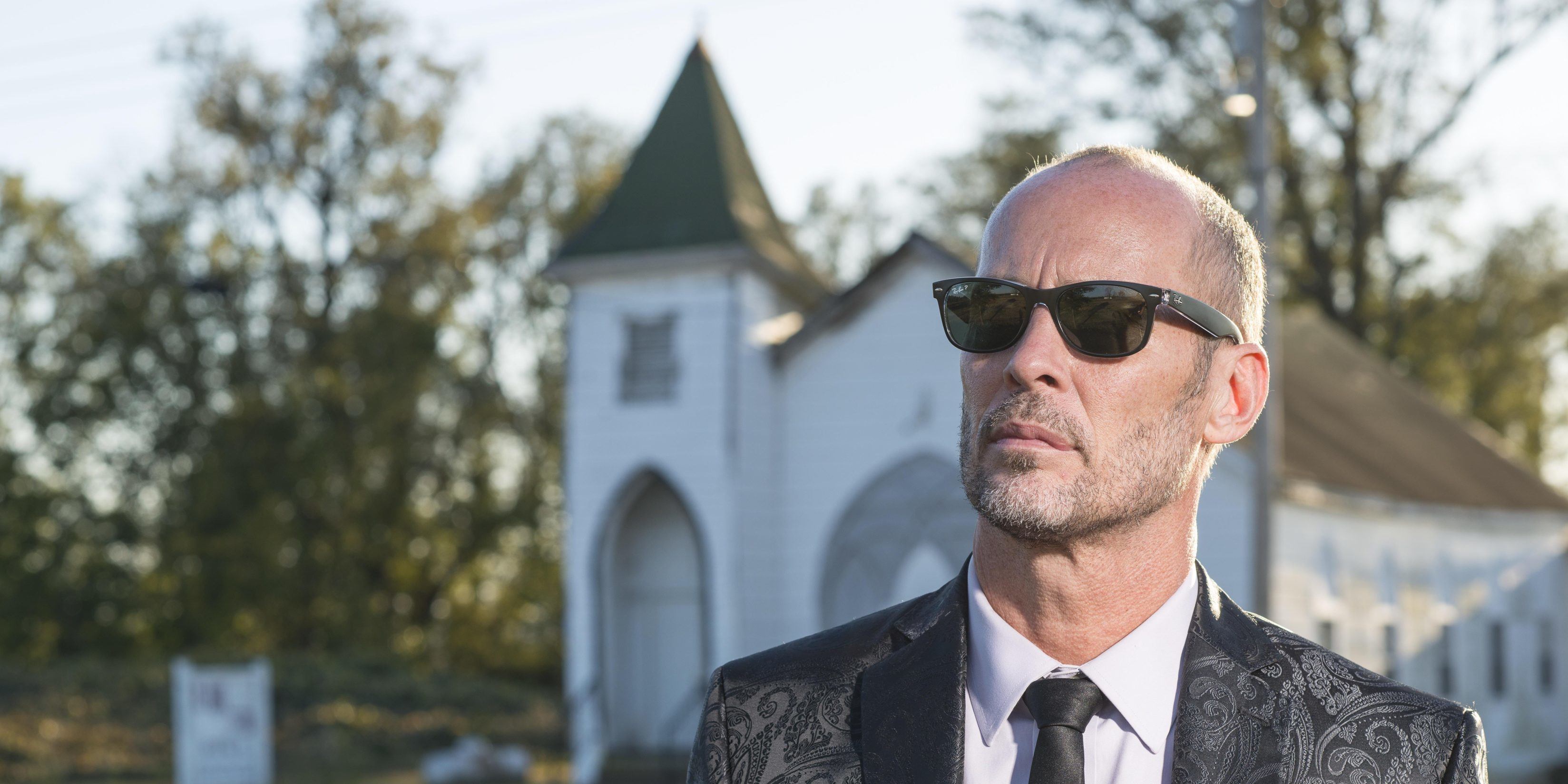 The son of a preacher man, Mississippi-raised Thorn spent much of his childhood in church, participating in multiple weekly services with his father as well as at neighboring African American congregations, where he became entranced with the music whose infectious spirit is captured on the new album.

The album was recorded at three temples of sound: the Sam C. Phillips Recording studio, whose namesake gave another son of Tupelo his start; at FAME Studios in Muscle Shoals, where Thorn worked as a songwriter for legendary producer Rick Hall early in his career; and at Preservation Hall, where horn players from the celebrated jazz venue lent songs a New Orleans vibe.

The new release marks Thorn's first time recording gospel music after a dozen albums in roots-rock mode, though his upbringing has previously been reflected in his creation of a body of strikingly original songs. In his own songwriting, Thorn often addresses the foibles of human relationships, although he doesn't favor the sacred over the profane.

As an accomplished painter, former professional boxer, and seasoned skydiver, Thorn has never shied away from new challenges, but cutting a gospel record was just like going home.

Thorn's father Wayne was a bishop in the Church of God of Prophecy, a Pentecostal denomination, and Thorn was just three when he began singing and playing tambourine at services. Congregational participation was valued more than skilled soloists, and Thorn also found a showcase for his talents at Saturday night "singings."

But his most memorable musical experiences were at an African American branch of his father's church, the Okolona Sunrise Church of Prophecy. "There might be ten people playing the tambourine, but the rhythm was locked in, and they'd let me play bass. I loved the Appalachian gospel of my parents' church, but it was a treat to play with those musicians. They worshiped in a different way and the music was different, and I feel blessed to have been in that church setting."

The sermons in Church of God of Prophecy churches warned sinners of fire and brimstone and it wasn't uncommon for congregants for congregants to speak in tongues. But the lasting legacy for Thorn wasn't a strong sense of guilt as it was for many others who grew up in Pentecostal churches. "I think that they use guilt to intimidate you, but I don't buy into that anymore. There ain't no love in that."

Instead he continues to be inspired by the strong sense of communion that was fostered by musical fellowship. "One of things that I take a lot of pride in is that I love everybody, and what I learned in church paid dividends. When I'm up there entertaining it's also a glimpse of what my life has been and how gospel music has molded me into who I am."

Thorn's parents wouldn't allow him listen to secular music at home (in his teens, he had to hide his only two LPs - Elton John and Huey Lewis - from his father), so he listened at friends' houses to Kiss, Peter Frampton, and the bawdy "chitlin' circuit" comedy albums that he credits with inspiring the dark sense of humor that pervades his lyrics. But gospel music remains Thorn's most abiding musical touchstone, the sound that first stirred his soul.

He was just 14 when sometime gospel artist Elvis Presley died - "The world stood still in Tupelo," he recalls - and while the King's records weren't a major influence, Thorn emphasizes the similarity of their early experiences.

"Elvis literally went to a lot of the same churches I did. It's almost identical how we started. When they filmed him from the waist up it wasn't vulgar, it was the moves he learned in church, dancing in the spirit."

At 18 Thorn was caught sneaking out his bedroom window to romance a young neighbor, and his father presented the ultimatum of publicly repenting or "disfellowship" - losing his church membership. He chose the latter and immediately took out a loan to buy a trailer (where he lived 'in sin' with that girlfriend), landed a full-time job at a furniture factory, and joined the National Guard.

Tupelo presented few avenues for professional musicians, but Thorn soon met his longtime songwriting partner Billy Maddox, who had strong ties to the musical hub of Muscle Shoals. The duo began writing under contract for Rick Hall, owner of the legendary Fame Recording Studios, where Thorn cut demos of their songs.

As a performer, Thorn was playing solo gigs in Tupelo for $50 a night and further supplemented his factory income with boxing. He learned to box from his paternal uncle Merle, a one-time pimp celebrated in "Pimps and Preachers," Thorn's autobiographical song about his two mentors: "One drug me through the darkness/One led me to the light/One showed me how to love/One taught me how to fight."

Thorn would box fourteen professional fights (10-3-1) as a middleweight between 1985 and 1988 with his most prominent match against four-time World Champion Roberto Duran. He lasted a respectable six rounds before a doctor stopped the fight due to multiple cuts.

Although proud of his boxing career, Thorn says that he's not surprised he's achieved more success as a performer. "I went a long way in boxing, and got to fight one of the greatest, but the reason Duran beat me and everyone else was that he had the ability to relax under extreme pressure. When I was in the ring I was nervous and afraid, but when I'm on stage I'm comfortable. I've been singing in front of people all my life and I know what I've got to do."

The songs on Don't Let the Devil Ride, co-produced by Billy Maddox and Colin Linden, likewise fall into that same comfort zone.

"We're bringing Paul's fans under the tent at a revival," says Maddox, who likewise grew up listening to black gospel. "A lot of emotion goes on in those places, with people being saved while the band's playing behind them."

The exuberance of the music, says Thorn, evokes the warm-hearted nature of these social gatherings. "The first track, 'Come On Let's Go,' it's talking about going to church - that I can't wait to see you, and see you how you've you been doing," says Thorn.

Few of the songs here are well known. Maddox found most of them while digging through releases from small gospel labels in Mississippi and Alabama. "We just picked things that had a great pocket," he says. "One person described the feel as 'gospel lyrics set to stripper music' and that's pretty close. The songs are slinky and greasy and right in Paul's wheelhouse."

The most familiar track here is no doubt Thorn's relaxed tempo version of the O'Jays "Love Train," a song whose feel-good qualities readily adapt to a gospel setting. The Mighty Clouds of Joy, whose records Thorn listened to as a teen, made it a staple of their live performances.

The other songs stretch back much farther, but their themes - of redemption, taking stock of one's life, and resilience in the face of troubles - are universal, making them readily adaptable to the fresh takes here. Nashville's McCrary Sisters, for instance, lend a buoyant feel to "You Got to Move," a northeast Mississippi standard, best known through a solemn slide guitar take by Mississippi Fred McDowell.

The sisters' father was a founder of the Fairfield Four, a capella gospel singers whose live radio broadcasts on CBS in the '40s and '50s were extremely influential. Fellow guest artists the Blind Boys of Alabama, founded in 1944, were founders of the "hard gospel" quartet style that dominated the era from which many of the songs on this record where drawn. Also joining Thorn on vocals is Texas-born Bonnie Bishop, who attributes her soulful singing style to spending her formative years in Mississippi.

Both Maddox and Thorn were longtime friends with Hall and the Phillips family, and Maddox says that recording in Memphis and Muscle Shoals was a natural extension of the whole process and the only proper way to honor this particular body of work. "We were returning to the Motherland."

Rick Hall died in January of 2018, making the whole experience that much more poignant for Thorn and co-producer Maddox.

"The last time I saw Rick he came into the FAME studio to say hello," Maddox recalls. "We invited him to sit down and listen to the playback of a track we'd just finished. He closed his eyes and leaned over the console as the music played.

"About halfway through the tune he turned the monitors down, looked me right in the eye and said, 'What have you done?' I asked him what he meant. Then he got this big grin on his face and said, 'Well, that sounds just like me.' That moment validated everything about this record for me and Paul."