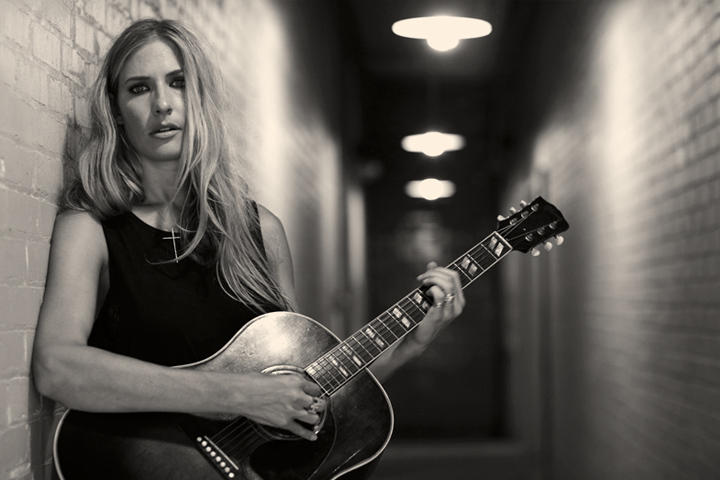 Most country artists talk about their long journey to Nashville, but Holly Williams was born and raised in country music's capital. Most country artists speak of some music-loving elder who almost made it, but Holly Williams comes from country royalty. Hank Williams was her grandfather, Hank Jr. her dad, and Hank III her half-brother. Despite all this -- and a couple songs she wrote at the age of eight -- when growing up Holly wasn't interested in music, and dreamed of a career in modeling. Hank Jr. and Holly's mother had separated when Holly was young, but in her teen years her father was taking his daughter to more of his shows. Perhaps that's why, at the age of 17, Holly finally tried playing one of the guitars in the house. Within a week she was writing introspective, somewhat dark, songs.

After graduating from high school, she gave herself a year to try the music business before she would settle for college. Three months in Los Angeles to study piano, write songs, and attend concerts by the Rolling Stones, Elliott Smith, and Neil Finn helped her focus. Her songs had landed in the hands of Ron Sexsmith, who immediately offered Williams a support slot on his European tour. By 2003 she had recorded and released her own EP, toured with Billy Bob Thornton, and signed with Universal South. The label issued her debut full-length, Ones We Never Knew, in October of 2004. A year later Williams was dropped by her label and later involved in a serious car accident that required months of recovery. She returned in 2009 with the album Here with Me and its hit single, "Keep the Change," both released by her new label, Mercury. The album was critically lauded, but she parted ways with the label after touring in support of it.

‍
Williams began running her own clothing store in 2007. She took a couple of years off from recording to get it running. Then she turned 30, and married her guitarist, Chris Coleman. When she decided to record again, she opted to do it herself. The Highway is a self-financed and self-released offering on Williams and Coleman's Georgiana Records label. Produced by Grammy-winner Charlie Peacock, the 11-song set features guest appearances by Jackson Browne, Jakob Dylan, Dierks Bentley, and Gwyneth Paltrow. A year in the making, it was released in early 2013.