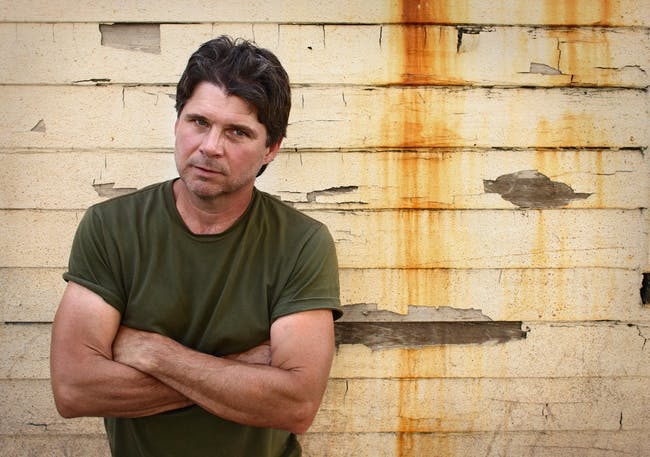 Chris Knight’s story begins six miles outside of Slaughters, Kentucky, a remotecoal-mining town of 200 people where Knight was raised and still lives with hiswife and children on 40 wooded acres. Chris graduated from Western KentuckyUniversity in 1984 with a degree in agriculture and began working for the stateas a strip-mine reclamation inspector. Following his mother’s death in 1992, hebegan writing songs about the people, places and pain that he’s seen, knownand continues to live. His carefully honed character sketches and surely pacednarratives evoke real rural life more accurately and honestly than anything you’llhear on pop-country radio —not just the glory and the romance of ordinarySouthern existence, but the darkness and the disappointments. Chris Knight’scharacters have dirt under their fingernails and life behind their eyes. His liveshows stay with you like a long hot summer.Reaction to his 1998 debut album Chris Knight – which included the hitAmericana and AAA tracks ”It Ain’t Easy Being Me,” “Framed” and “Love AndA .45” – was immediate, with writers nationwide comparing him to everyonefrom John Prine and Neil Young to Johnny Cash and Nebraska-era Springsteen.In 2001, Chris returned with A Pretty Good Guy, taking listeners on a strippeddown journey through a far darker side of survival. Despite being released on9/11, the often brutally bleak album received stellar reviews as well as strongAAA airplay. His 2003 release The Jealous Kind added a new wit and wisdomthat led Playboy to rave “Knight can break your heart with his singing, but thesongwriting here is even stronger” and rock publication Blender to hail its plainspokenbrawn. Yet it was The Dallas Observer that perfectly captured Knight’ssingular power. “He created an authentic country-rock Americana withcompositions carved from the oaken folk-song root and whittled into truemusical folk art,” wrote Rob Patterson. “Knight’s the real deal, free of anyartifice, and his stuff runs over the current NashVegas crap and faux-countryposes of most all the alt-country crowd like a pickup truck speeding home fromthe bar after Saturday night’s last call.”Chris’ last studio albums: “Enough Rope” and “Heart Of Stone” stand asunprecedented testaments to Knight’s artistic evolution, as well as the albumsthat have finally kicked down the doors of success on Knight’s own terms.“When you have you have something that qualifies as a successful artisticendeavor,” says Gary Nicholson (Grammy-winning producer known for his workwith artists ranging from Wynonna to Delbert McClinton.), “it shows thecommonality of human experience. That’s what Chris is a master at: He’s ableto invite you into his world and you’re able to identify with the same emotionshe’s expressed. He consistently pulls that off like never before.” “Breakthroughmusic always defies the norm,” says Ray Kennedy (renowned producer/engineerfor Steve Earle, Lucinda Williams, John Mellencamp, etc) explains, “The longestrunning careers are the ones that rub against the grain and don’t fit in. I thinkChris Knight is one of the premiere singer/songwriters of our time and it’s waypast time that the rest of the world finds that out. If there’s any justice in theworld, he will be held up as one of the greatest singer/songwriters out there.”Frank Liddell (Chris’ first producer of the self titled: “Chris Knight” and producerof Miranda Lambert, Lee Ann Womack, etc) spearheaded the release of “TheTrailer Tapes” and “Trailer II”, early acoustic recordings capturing the artist inhis true element before any possible influence from the Nashville community. Atrue pioneer, in the school of Lomax’s field recordings, Frank documented Chris’body of work. “These tapes are like an amazing photograph out of an old LifeMagazine, before Photoshop or fancy editing tricks, Liddell says. “What Chriswas doing could be harsh, like coffee or whiskey, but he is the most honestwriter I’ve ever heard in my life”.Chris Knight is sometimes dark, often intense and always without compromise.He is an artist that unfolds with the power and fury of Cormac McCarthy meetsCopperhead Road.