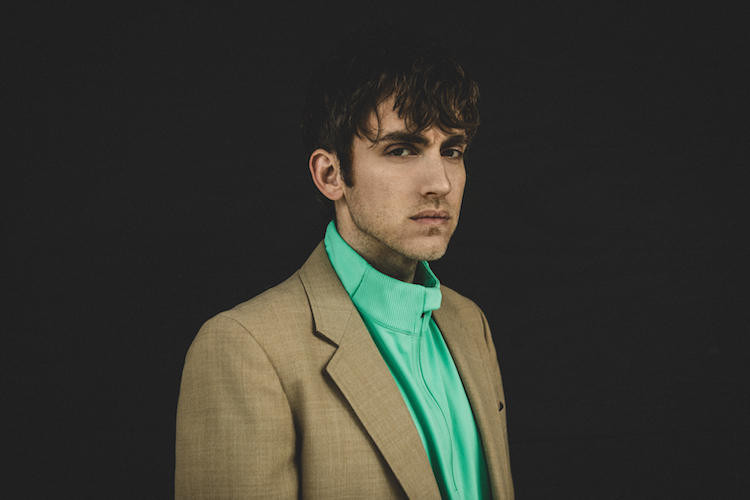 Andrew Combs’ anticipated New West Records debut, Canyons Of My Mind, is available now digitally, on compact disc, and on 150g vinyl. The 11-song set was co-produced by Skylar Wilson (Justin Townes Earle, Caitlin Rose) & Jordan Lehning (Rodney Crowell, Caitlin Rose) and recorded at Battle Tapes Studio in East Nashville, TN. AllMusic premiered a full stream of Canyons of my Mind stating that the album “continues to blur the line between country-influenced singer-songwriter material and lush, layered indie pop.” In a stellar 4 (out of 5) star review of the record, American Songwriter adds, “Gorgeous, sympathetic production from Skylar Wilson and Jordan Lehning enhances these songs, adding the right balance of gravitas that, even with strings and backing vocals, never intrudes on Combs’ melodies...this is a superb, emotionally poignant album that displays and expands Andrew Combs’ impressive songwriting, musical and vocal talents.” Paste Magazine expounds on his vocal talents commenting, “We often equate the greatest singers with the widest range, the ones that tremble and roar. Andrew Combs has never been loud. He doesn’t dress loud, he doesn’t seek controversy or even talk abrasively. And he’s never had to wail to crescendo an emotion. He does something very pure and hard to find: choosing harmony and orchestral elegance over excess. He sings in the vein of Harry Nilsson, Kris Kristofferson and James Taylor, artists whose work carries an element of effortless sincerity. Combs has shared that timeless quality since his first record and Canyons Of My Mind is an assured and accomplished continuation of that.”

Combs is currently touring the U.S. with an extensive European tour to follow. Please see below for full details. Ahead of the tours, Garden & Gun recently premiered the “freewheeling” album track “Rose Colored Blues,” and Rolling Stone Country released the Ry Cox directed cinematic music video for album single “Blood Hunters,” which can now be viewed/shared Here. Acknowledging the sonic breadth of Combs’ work, Rolling Stone Country states of the single, “The song opens with Combs’ soothingly gorgeous vocals on haunting echo and spare electric guitar that crescendos into a fierce, Seattle-riffed fury. The musical gambit removes it even further away from the constraints of traditional country to forge a more experimental, rock-forward take on folk in the vein of Kevin Morby, Angel Olsen, Cass McCombs or even their forefather, Leonard Cohen.” NPR Music previously shared the music video for “Dirty Rain,” Calling Combs “one of Nashville’s most poetically gifted young singer-songwriters,” they state, “The subtle dissent Combs expresses in ‘Dirty Rain,’ and which surfaces throughout Canyons Of My Mind next to elegant love songs and mood pieces, speaks to his maturation as a songwriter. Andrew Combs possesses a voice that always provides a thrill; here, he makes sure it offers relevant substance, too.”

A Dallas native now living near the same Nashville airport immortalised in the opening sequence of Robert Altman’s country music odyssey, Andrew Combs is a singer, songwriter, guitarist, and heir to that 1975 film’s idea of the Nashville troubadour as a kind of musical monk. As a songwriter, Combs relies on meditative restraint rather than showy insistence to paint his canvases, a technique commensurate with his idea of nature as an overflowing spiritual wellspring. Combs refines the vulnerable vagabond persona he mastered on All These Dreams while pushing it beyond those boundaries, into a more pastoral realm aligned with artists like Nick Drake and Tim Buckley.  The idea of the artist’s creative life as an ecosystem - one just as in need of cultivation and care as our own imperiled world - informs much of Canyons Of My Mind.